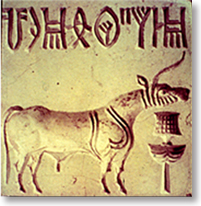 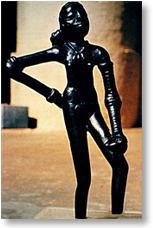 The terracotta figure representing a bull is a forceful representation, eloquently proclaiming the special study of the anatomy of the animal by the modeller who fashioned the figure. The animal is shown standing with his head turned to the right and there is a cord around the neck.